Posted on February 25, 2012 by rivertoprambles

In an earlier post entitled “Three River Rise” (12/19/11) I gave an introduction to a special hill in north-central Pennsylvania. The hill near Gold, PA is the place where three rivers are born, where three major watersheds share a common source. From here the Genesee River flows north to Lake Ontario and Atlantic Ocean; Pine Creek muscles up and quickly builds to river size en route to the West Branch Susquehanna and Chesapeake Bay; and the Allegheny River issues from several springs and makes a westward run to the Ohio and Mississippi rivers.

This triple divide of watersheds, unique to the eastern half of the United States, is a natural feature of my home ground that I’d like to highlight through a focus on native brook trout. The native fish is an indicator species for my region, indicating a healthy

environment when present, or a stressed environment when absent. For a casual exploration of the upper watersheds near Gold, I decided to choose three small streams, one for each of these watersheds, and walk them with a fly rod. I would do it in the winter, since the current season was favorable for this activity and would allow a simple, black-and-white view with a minimum of distractions. For anyone interested in doing something similar, a caveat: special regulations are in effect for winter fishing in this region and must be heeded. Secondly, for any lands posted against trespassing, landowner permission must be granted before entry. 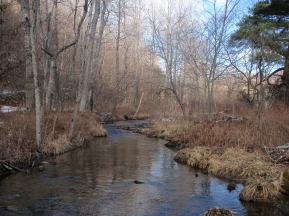 My first of three visits to the Triple Divide began on the west side where the Allegheny River gathers force. I stopped at a little feeder stream to the river where a first stonefly of the season flew from the water and landed gently on the back of my hand. The air was 30 degrees Fahrenheit and the water registered 39. The level of the water was disconcertingly low and its color absolutely clear. Despite my careful stalking, several brook trout scattered

from the shallow pools. The narrow stream is a tough one to fish in winter, even more so in summer when the banks and canopy are lush with growth. Nonetheless, this is a quality wild trout stream that has plenty of “structure” enabling fish to survive.

I fished the water upstream farther than I’d gone before, employing simple swing casts or a tricky bow-and-arrow cast into tight spots

under branches. I’d be lying if I said the afternoon in solitude wasn’t fun. A brown trout surprised me when it gave a fearless chase of the drifting bead-head. In a small stream like this, a 13-inch brown on the line always seems much bigger than it actually is. And when I stepped out to the seasonal roadway that parallels the lower sections of the stream, I saw the track of a forest denizen, the bobcat.  Each paw print of the cat was nearly the same size as my fishing reel. 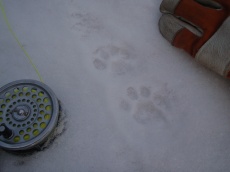 The missed brook trout, the brown, and the ghost of a winter bobcat put me on the edge of myself, beyond the borders of a routine day. I could peer into the eyes of wildness, into the living spirit of three rivers. I could hope that the proposals for industrial development of this headwaters district wouldn’t overpower the growing concern for keeping the watersheds clean and healthy. I like politics about as much as a kick to the groin, but in places like this, a growing affection for the land and water runs smack into politics nine times out of 10. If you care deeply about a place, you sometimes have to fight for it, and that means getting political. For now, though, I pushed the business out of my face like a spider’s web.

Here the three young rivers were like the head, the heart, and the soul of a human being. I kind of looked at them as a fluid body for an old guy fishing and, with luck, for generations of visitors to come.

Welcome to Rivertop Rambles. This is my blog about the headwaters country-far afield or close to home. I've been a fly-fisher, birder, and naturalist for most of my adult life. I've also written poetry and natural history books for thirty years. In Rambles I will mostly reflect on the backcountry of my Allegheny foothills in the northern tier of Pennsylvania and the southern tier of New York State. Sometimes I'll write about the wilderness in distant states, or of the wild places in the human soul. Other times I'll just reflect on the domestic life outdoors. In any case, I hope you enjoy. Let's ramble!
View all posts by rivertoprambles →
This entry was posted in Uncategorized and tagged Allegheny River, bobcat track, Gold, native trout, PA, politics and place, Triple Divide, winter fishing. Bookmark the permalink.

2 Responses to The Triple Divide (1)