Posted on November 13, 2011 by rivertoprambles

In the afternoon I fished the upper Allegheny River, the Delayed Harvest water, well up into the woods. The stream conditions matched the beauty of the weather, clear and cool, full and comfortable. And the fishing was good– a nice change in an otherwise mediocre season.

I caught and released five rainbow trout, two of them at 15 inches each, one of them at 16 inches, and the prize stretching out to 17. After several excursions fly-fishing for Pacific salmon and brown trout in the flatlands near Lake Ontario, and for landlocked salmon near Cayuga Lake, it felt good to walk with an upland “stick,” in this case my trusty Thomas & Thomas bamboo, while dropping flies into pretty pockets of high Allegheny.

My flies were the reliable Woolly Bugger and the Egg. The famous Bugger was invented by the late Russ Blessing, a Pennsylvania angler who often fished Slate Run. As for the Egg, it’s a pattern with a sense of humor. The Egg seems to ask if it’s really a “fly” or not. Which came first, the Chicken-Hackled Dun Fly or the Egg? I used to be reluctant to use the Egg. It just didn’t have the dignity of a Gold-ribbed Hare’s Ear or a Royal Wulff. To use it seemed akin to casting a rubber worm or an artificial hatchery pellet. 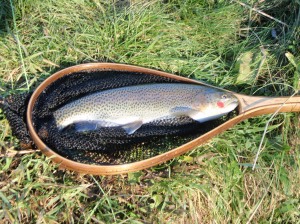 It even seemed to question one’s morality as an angler. Wasn’t it an imitation of life at its conception? I got over that eventually. Almost. Through the years, I’ve fished the Egg innumerable times in early spring or autumn while pursuing salmon, steelhead or upland trout. Yet even today, on a river where only artificial flies and lures can be legally cast, I probably paused a moment or two to ask myself again, Is it okay to use this thing? This twist of glow-yarn trimmed for the hook. This tiny ball of stuff that triggers an avalanche of response in a trout.

When the Egg fly struck shallow water, the trout shot upstream ten feet or more, then returned to reconsider. The Egg drifted slowly and… was eaten by the fish. Another rainbow struck in deeper water, in a seam of fast and slower currents. Its energy connected with the rod and with my bloodstream. The largest rainbow, 17 inches of coldwater fury, put a full flex in the cane with leaps and wild circlings. As I walked back to the car, I had to reconsider the Egg: a simple construct, an archetypal bit of yarn, and more.

Welcome to Rivertop Rambles. This is my blog about the headwaters country-far afield or close to home. I've been a fly-fisher, birder, and naturalist for most of my adult life. I've also written poetry and natural history books for thirty years. In Rambles I will mostly reflect on the backcountry of my Allegheny foothills in the northern tier of Pennsylvania and the southern tier of New York State. Sometimes I'll write about the wilderness in distant states, or of the wild places in the human soul. Other times I'll just reflect on the domestic life outdoors. In any case, I hope you enjoy. Let's ramble!
View all posts by rivertoprambles →
This entry was posted in Uncategorized and tagged Allegheny River, Egg Fly, Woolly Bugger. Bookmark the permalink.